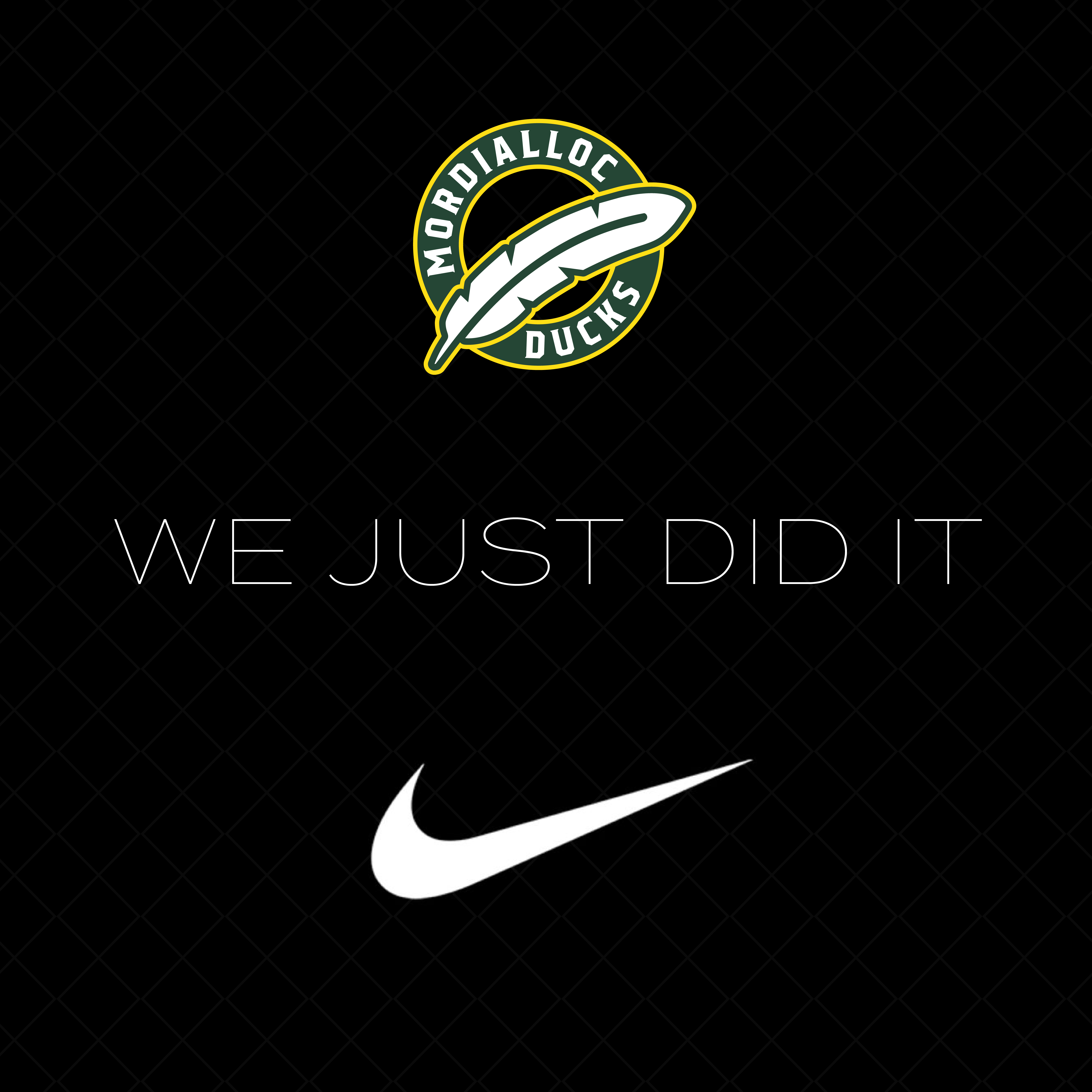 A select amount of Ducks branded Nike merch can now be purchased from Ultra Football!

Click here to see the full range! (signup is required to view) 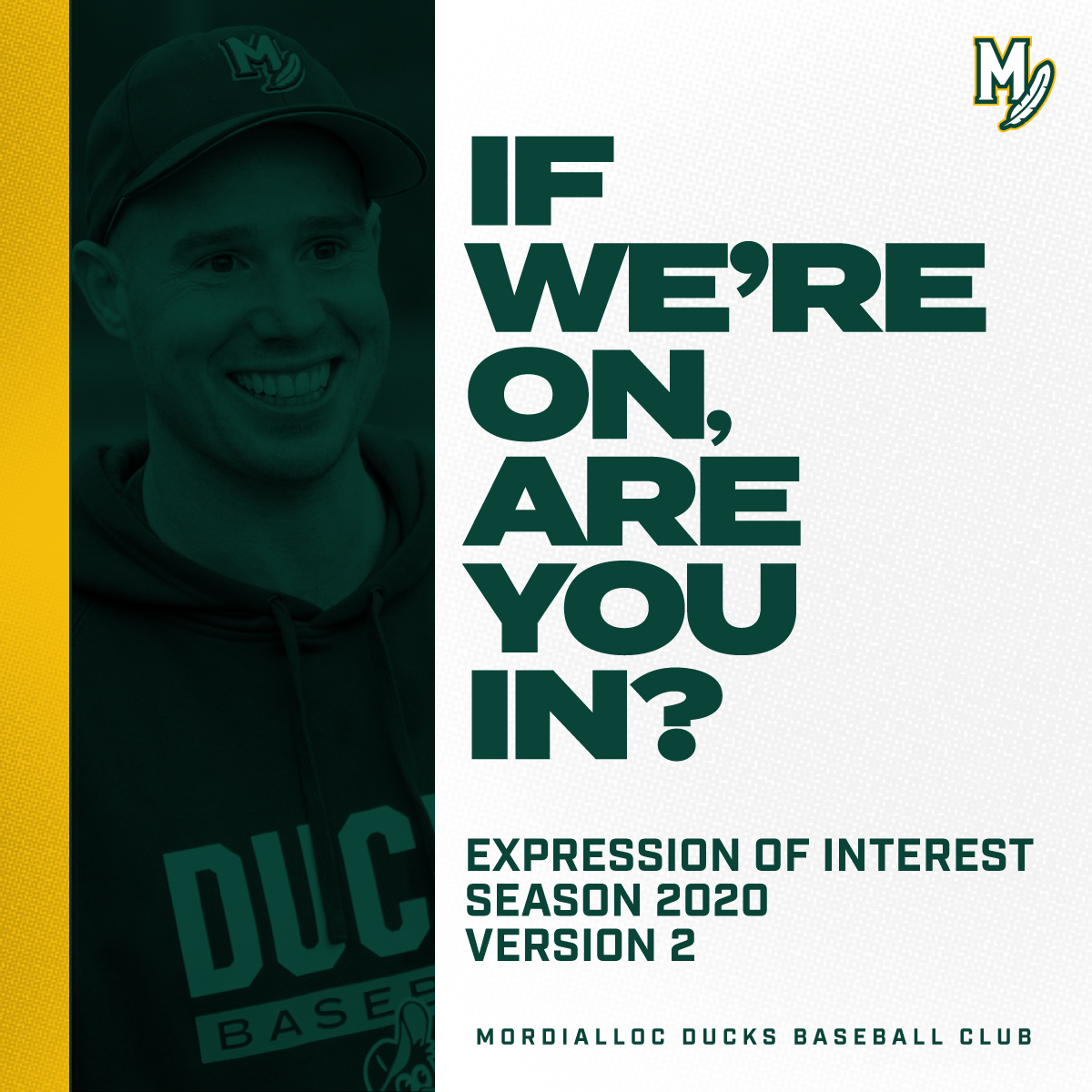 Well this year certainly got a bit ducked up!

This is a continuously edited post, updated as we get more info.

We’re nearly there! Well.. for training at least.

There is going to be quite a bit of change to normal pre-season training, so pay attention!

Anyone wanting to attend training must register via Baseball Victoria prior to attending.

Registration is free. You can register to train with the Ducks by clicking here and logging in or signing up. This will cover you with the official insurance you need.

We are still awaiting information from Cheltenham Baseball Club about when we’ll be allowed to train, but we expect that to happen within a week.

Some notes about training

Baseball Victoria has posted a lot of great info about this, here’s a summary from their info:

You can find a longer set of FAQs on Baseball Victoria’s website, by clicking here.

Once we have some information around when we can start training, we’ll promote a pre-season training calendar.

Some notes about the 2020 Winter Season

Dates: At this stage we are hopeful of getting in a shorter season, starting possibly in early July and ending possibly in late September/early October. The details are still being worked out by the Dandenong Baseball Association and obviously depend on the situation.

Fees: the details around Baseball Victoria and Baseball Australia fees are still being worked out. We are also still waiting on some information from Cheltenham Baseball Club as to the costs for a shortened season. As always, we try to keep the fees to a minimum.

For the new Duckers

The biggest change is that shared equipment is a no-no. But don’t worry! We are allowed to allocate certain pieces of equipment to individual players for the season, and we’re currently purchasing quite a bit of new gear to help you give the game a go. Many of the Ducks have also made much of their extra gear available for this purpose too. We’re still finalising our equipment list to see what’s available and will provide further info at a later date.

If a season starts, we’ve got plenty of caps but will require them to be paid for ($30 each) due to the issues with shared apparel.

We are improving our inventory of uniforms, which will have to be assigned to a player for the season, rather than being shared. Uniforms are not a necessity for our level of baseball, however you will need to be wearing something in club colours, according to league rules.

We have a limited amount of merchandise remaining!

Reckon that’s about it for now 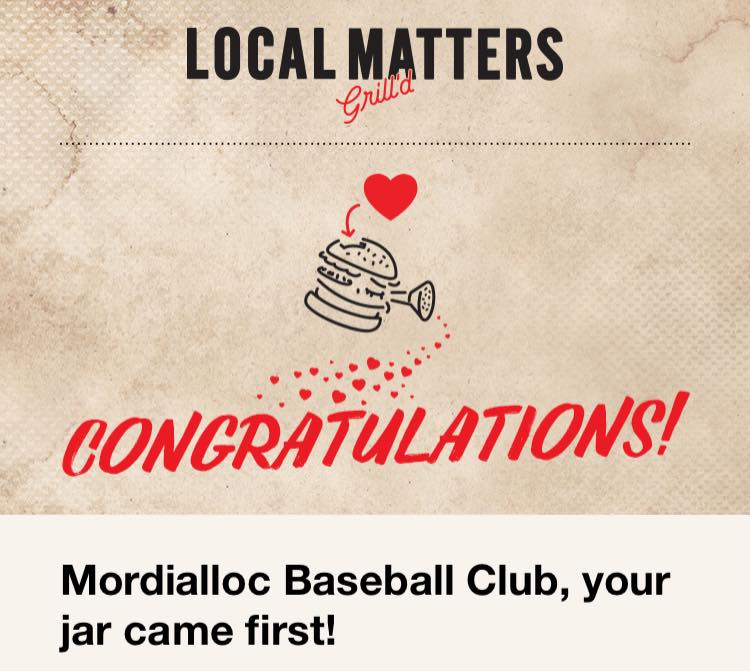 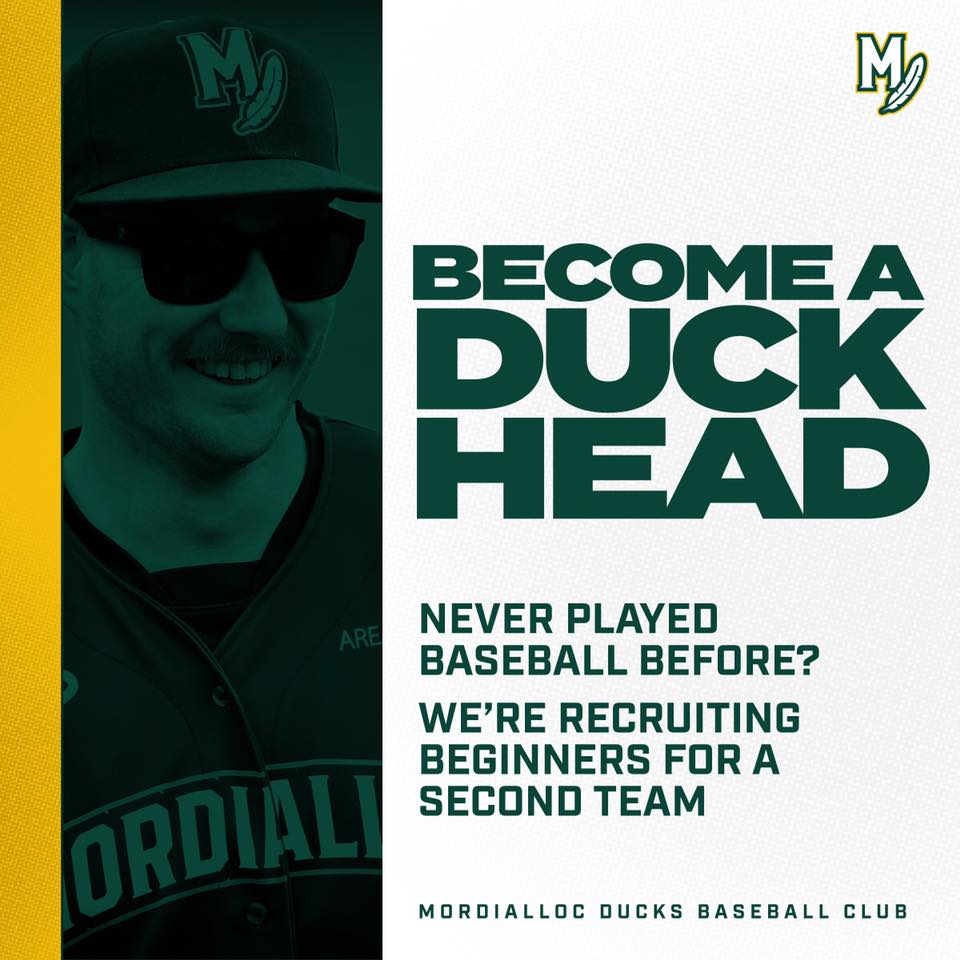 Wanna be a duckhead? We’re recruitin for a new team for 2020. Get in touch ya dorks 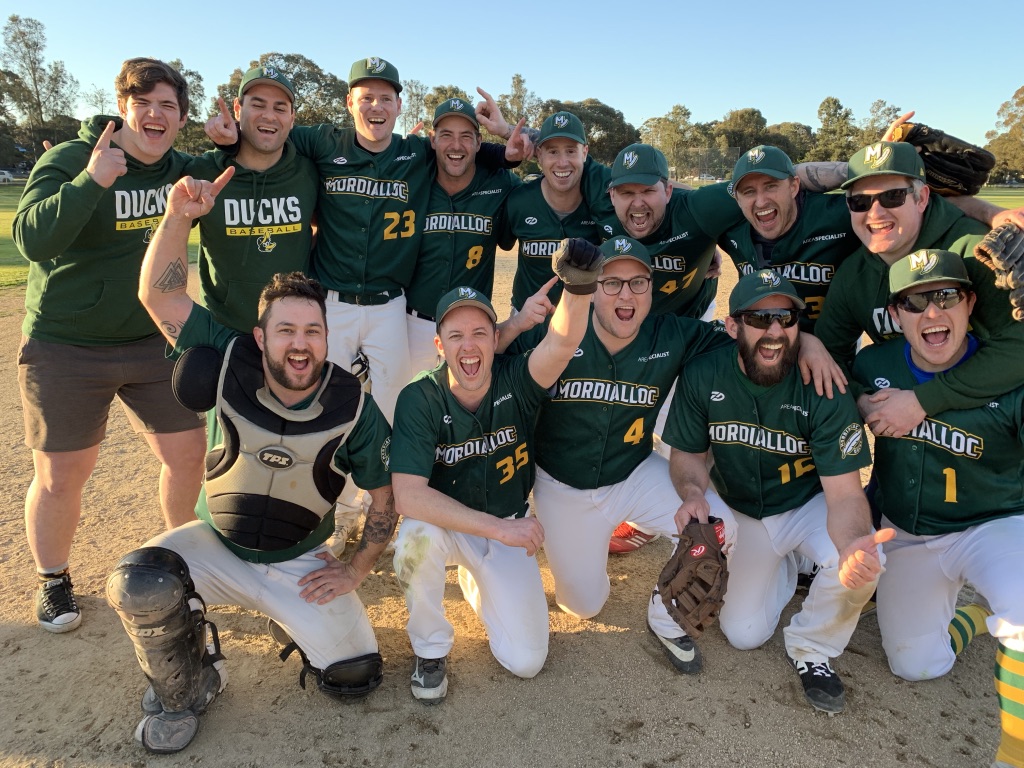 The Ducks are premiers! For the first time in this young club’s history, the shield will live in Mordialloc.

On a windy last day of Winter we knew we had to play at our best to beat the minor premiers, and after hitting two runs in the first inning off an Eddie Meadows line drive double to left-centre field, things were looking up. The Forest Hill boys weren’t ones to lay down however, and they scored two right back. Thankfully we had seen the last of the starting pitcher, who was replaced after the first inning.

We added a run in the second but Forest Hill tied it up again in the bottom of the third.

Cue the fourth inning, when we scored two runs to go up 5-3. It was nerve wracking stuff as Forest Hill kept the pressure up and putting balls in play. Eventually their pressure paid off with two runs in the bottom of the fifth.

Entering the sixth inning and with time running out, the pressure was on to put one on the board but we weren’t able to. Thankfully the Mordy boys were able to put their own pressure on, keeping Forest Hill off the board in both the sixth and seventh inning to force the extra inning.

The Quack Pack was in full voice on the sideline, with chants, duck calls, and jokes all adding to the fun and atmosphere, helping to support the guys as they stepped up in the eighth inning.

Somehow we scored three runs, with Eddie and JC hit-by-pitch and now on base, Luke looped one between the second baseman and the right-fielder to plate one. The other two came from a line drive to left by the one and only Aaron “Chef” Wilson.

We shut them out in the bottom of the eighth as they left a man on third and second but couldn’t move them any further, and when the third out came from a JC (short stop) to Eddie (first base) put-out, the Ducks – both players and supporters – celebrated a wonderful historic moment together.

Well done to the Forest Hill guys. They hit really well and could have easily taken the game if not for a little bit of bad luck.

Thanks to the MWBL for the 2019 season, and to outgoing administrator David Rice for his work – it’s not an easy gig and we really appreciate all the work that you’ve done.

Some highlights:
We pulled three (!) double plays, with Shaun O’Reilly in the thick of it, and a first to third put out with MVB making the tag.
Double Dunham’s tumbling catch and throw to home was a special effort
Ash Huddo’s 2-out clutch hitting along with a great catch in right field
Brilliant pitching by both Luke and Scotty

How do you sum it all up though? What a crazy season. It’s had a bit of everything, and the guys have stuck together through thick and thin. Now we start planning for 2020 and enjoying some summer sun with our families, or for some, playing baseball elsewhere for the summer season.